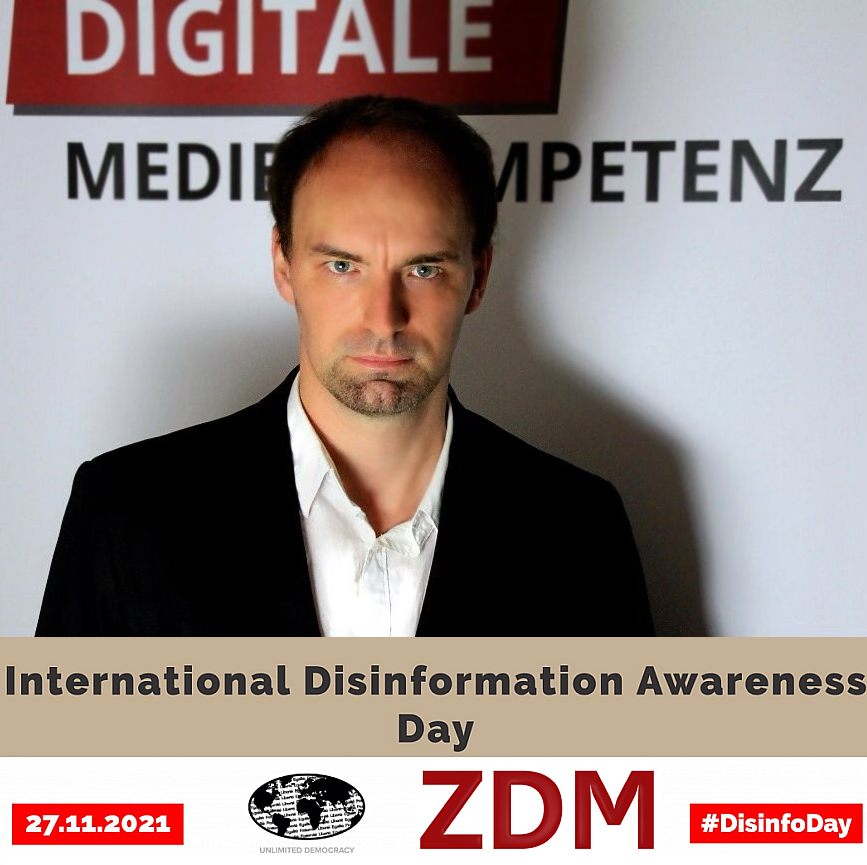 Dietmar Pichler, Media Literacy-Expert and the co-founder of the Center for Digital Media Literacy, cooperates with Anna Patterman (Unlimited Democracy) to raise awareness of the damaging effects of #disinformation

“Today, disinformation is a global threat to both democracy and Public Health,” says the disinformation awareness advocate and initiator of  #DisinfoDay, Dietmar Pichler (Twitter @dietmarpichler1). Dietmar; the founder of the Center for Digital Media Literacy (zentrumsocialmedia.com), and also the political advisor at Unlimited Democracy (unlimiteddemocracy.com); sees Media Literacy as the only “vaccine” against disinformation: “I am very happy that we are proclaiming the first Worldwide Disinformation Awareness Day on November 27th under the umbrella of Unlimited Democracy in order to raise awareness of this extremely important issue.“

Disinformation is false information, created with the intent to harm a certain group, nation, person or organization, whilst Misinformation is unintentionally spread false information, sometimes initiated by a misunderstanding. Unlimited Democracy founder Anna Pattermann (Twitter @PattermannAnna): “Where disinformation dominates, democracy comes under pressure. We have to do something about it and this day is another big step in the defense of democracy, which is a special concern of mine as a Ukrainian.“

Why do we need Disinformation Day #Disinfoday?

Disinformation is not a brand-new term but due to digitization and, especially various social media platforms, it has become a core problem for democracies. It has never been so easy to create confusion, spread propaganda or question scientific studies in an absurd way. Especially in times of the pandemic, when politics and public health are so closely interwoven, when we experience social discrepancies – people of any race, gender, or political beliefs have to become more aware of this issue and consequences of disinformation.  “Today users are no longer just consumers but also producers and distributors of news”, says Dietmar Pichler from the Center for Digital Media Competence and points out the responsibility of all of us.

Why we need Media Literacy #Disinfoday

Media Literacy is not a brand new term, it was already on the table in the 20th century, although most of the people were just consumers and not producers of information.

Radio was invented, later Television Public-Television, followed by cable TV and tabloids told us what we needed to know, or at least, what we thought we needed to know.  With the diversity of media, it was getting more important to think about the quality and reliability of the content, but it was still a privilege to be in the position to produce content.

Let’s go back to the time when radio was state of the art technology. For many decades, people were wondering how it was possible that airing a radio drama by H. W. Wells could really cause panic in the audience. The New York Times titled 1938: “Taking War Drama as Fact; Many Flee Homes to Escape ‚Gas Raid From Mars‘–Phone Calls Swamp Police at Broadcast of Wells Fantasy RADIO WAR DRAMA”. Even when CBS announced several times that the radio show was fictional, people still felt somewhat confused. Now, in 2021, we have almost 4 billion social media users worldwide, with certain capability to influence our society and public order, in a positive or, like we can witness in many cases today, in a bad, harmful way.


In the European Union, according to a poll more than a third of the population claims to be confronted by disinformation on a daily basis, 83% of respondents said that fake news represents a danger to democracy. Another survey, by the Center of Digital Media Literacy shows that 60% of the people in Switzerland, Austria and Germany (DACH Region)  admited, that they shared „Fake news“ in the past via Social Media. 97% agree, that „Social Media Competence“ is important (28%) or very important (69%). Disinformation comes in many forms and from many sources these days. State actors like Russia have the power to harm Western democracies not only with their “propaganda outlets” like “RT” or “Sputnik”, but also with organized trolling and hacking attacks. If developed or developing democracies want to be resilient against disinformation, if we want to preserve freedom of speech, we need media literacy, “digital citizens” who are, at least to some extent, resilient against lies and propaganda. Users are „Gatekeeper“ these days and have a responsibility, not only about the information they produce, but also what kind of information they spread. „Sharing“, „retweeting“, „reposting“, no matter how the platform calls the way of spreading information, it is always crucial to re-check information and consult different sources.

In May 2021, a dubious agency in London with connections to Russia, tried to spread a disinfo-campaign against the vaccine of Biontech/Pfizer with the help of influencers and even offered them money if they spread their “information”. I was invited to speak about that case on Austrian TV and highlighted the fact that influencers in Germany and France not only did not accept the offer by that shady agency, but also exposed the whole case to the public. This is one example, when disinformation reached a dead end, at least in Europe.
We will not be able to stop this phenomenon completely, but our joint effort should be to handle the problem as good as we can and Media Literacy is the most effective defensive weapon in this “information war”.

Digital media competence belongs to the key competences in today’s society. It’s not only marketing departments and celebrities that have to deal with Social Media and modern publishing technology these days. Digital Media Competence allows users not only to consume but also to produce and spread content in a proper way, which adds even more value in today’s society.

Media Literacy is not only important to fight and avoid disinformation: Managing the challenges of online communication, especially Social Media is a key asset in the professional life of every employee. This is the reason why the Center for Digital Media Literacy customizes its training especially for companies and various kinds of organizations.

Reputation management, digital security, employees health condition, even legal issues can be positively influenced by Media Literacy. CSR (Corporate Social Responsibility) units can use Media Literacy as a way of giving back something to society, while PR and Marketing benefit from employees that support the overall communication strategy of the organization. We shall not forget about HR (Human Resources): Media Literacy is a state of the art skill that should be provided to all employees. Today Media Literacy means DIGITAL Literacy and we need to provide it to the adult generation too, the digital world is no longer reserved to youngsters.

This website uses cookies to improve your experience while you navigate through the website. Out of these cookies, the cookies that are categorized as necessary are stored on your browser as they are essential for the working of basic functionalities of the website. We also use third-party cookies that help us analyze and understand how you use this website. These cookies will be stored in your browser only with your consent. You also have the option to opt-out of these cookies. But opting out of some of these cookies may have an effect on your browsing experience.
Necessary immer aktiv
Necessary cookies are absolutely essential for the website to function properly. This category only includes cookies that ensures basic functionalities and security features of the website. These cookies do not store any personal information.
Non-necessary
Any cookies that may not be particularly necessary for the website to function and is used specifically to collect user personal data via analytics, ads, other embedded contents are termed as non-necessary cookies. It is mandatory to procure user consent prior to running these cookies on your website.
SAVE & ACCEPT
Go to Top